10 tips to save money while staying warm this winter 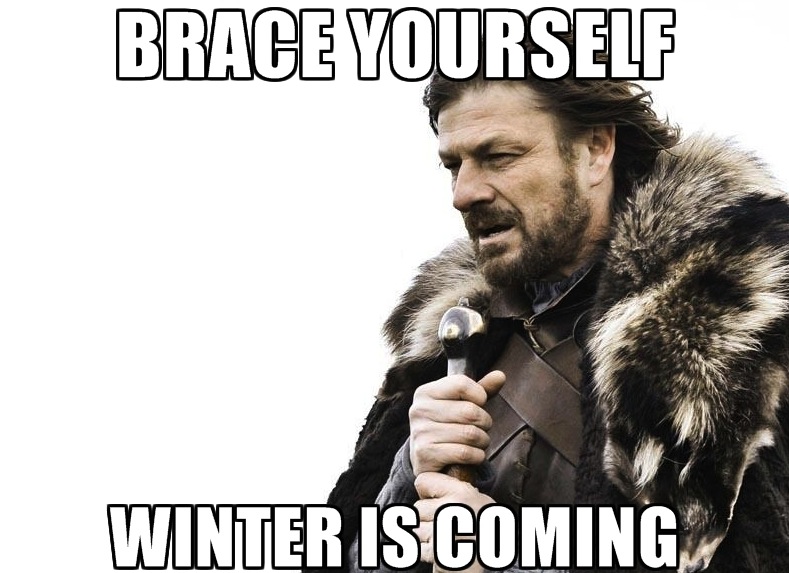 Now the clocks have gone back, the nights are drawing in and the TV schedules are crammed with Strictly Come X Factoring it’s clear that Winter Is Coming.

If you’re a fan of Game Of Throne’s you will know that means endless months of cold weather, and an army of undead White Walkers making their way over The Wall. Although it might not be such a serious issue back here in the real world, but keeping warm in winter can still be an expensive task if you’re not careful.

So to help you out we have put together this no-nonsense guide on how to stay warm this winter and keep those utility bills down.

First of all, let’s start with a common myth about household heating: Keeping the central heating on all day (at a constant temperature) is more cost-effective than regularly switching it on and off.

We’ve all heard this one – but is it actually true?

In a word, No. The only realistic way homeowners can save energy (and money) is by only cranking the heating on and up when the outside temperatures actually warrant it.

However that’s not the end of the story, as despite this advice coming from the Energy Saving Trust and British Gas, other experts argue the contrary and are strongly in favour of maintaining a consistent source of heat in the house all day (via radiator valves turned up and boiler down) to counter the effects of condensation; which forms as a result of switching the heating on and off.

It transpires that condensation collected within walls essentially conducts heat outside of the home.

Now, onto the money saving tips…

Make sure you know where the stop cock is

It’s vitally important that homeowners know exactly where their water mains switch off point is in the unexpected event of a burst pipe.

This common, and largely unavoidable, property mishap can occur without prior warning during sharp frosts and is routinely responsible for some £4,000’s worth of flood damage to homes up and down the country each winter, in the direct aftermath of people being clueless as to the exact grid coordinates of their stop cock.

Make sure you are able to quickly react to burst pipes by knowing exactly how to turn the water supply to your home off, as this could end up saving you a lot of money.

Switching your energy provider BEFORE the winter sets in means you can avoid paying over the odds prices for your utility bills.

As homeowners are more likely to stick rather than twist when it comes to household energy providers, they’re ultimately playing into the hands of those responsible (at a variety of escalating costs) for keeping us warm during those long cold nights. It’s possible to save up to £400 a year on utility bills by checking, comparing and switching to other providers. Now that’s definitely not to be sniffed at!

Setting up a monthly direct debit for paying out your energy bills can work out cheaper (an average of about 6%) than paying annually.

With energy providers typically estimating annual usage and mathematically dividing it by 12, this means that most folk are likely to create credit after summer (when usage is nominal), yet conversely often be in debt after you’ve survived winters (when it’s put into service permanently).

Driving in the winter is always fraught with extra risks – from high winds and rain to icy, snow covered roads. On top of driving more cautiously, it’s also important to ensure your vehicle is ready for the winter.

The basics of this include checking:

As well as the basic checks to make sure you don’t get caught out in colder, harsher driving conditions it is also strongly recommended that you always carry blankets, torches and water in your car so that you are well prepared if you get stuck on the road for an extended period of time.

Time is most certainly of the essence now that winter is just around the corner, in terms of ensuring that your vehicle is suitably covered should you run into difficulties brought on by the advent of the climatically unforgiving season.

There are a host of vehicle breakdown, home start and onward travel options available to the forward-thinking motorist, with some peace of mind packages on the market starting from as little as £16 (for basic cover), whilst for around £40 a year you can land yourself an all-singing, all-dancing version if you’re prepared to barter with the big boys.

Make sure your home insulation is up to scratch

Free loft and cavity wall installation is widely available to far more sectors of society (irrespective of income/status) than ever before; only half of us aren’t aware of it.

Legend has it that energy firms face consternation/sanctions if they don’t meet eco quotas, so increasing numbers are now affording free insulation to anyone in England, Scotland or Wales with a suitable home. Preferably one with a roof and four walls. According to British Gas 90% of homes that currently require better insulation can now get it for free, so check their site to see if you are eligible now: www.britishgas.co.uk/energy-saving-products/home-insulation/free-insulation

Even if you’re one of the unlucky ones who still has to foot the initial bill for the work, think on this: cavity insulation usually costs between £400 and £500 to install (including building work), and can save an average three-bedroom home up to £160 a year on its bills. Loft insulation costs about £300 and can save an additional £140 annually. So you’ll make your money back in no time.

Our busy-body dads were right all along when they used to follow us around the house switching things off and unplugging sockets after us. Apparently DVD players, TVs, games consoles and laptops still suck energy out of the walls even when they’re lying dormant.

Give your radiators space to ‘radiate’

A lot of people position their sofas in front of radiators – probably not intentionally, but something to do with feng shui.

Only it’s bad practice, especially so in the winter, as – irrespective of size – it blocks all the heat. And that’s because – and for the benefit of the uninitiated – you are almost certainly wasting money heating something that doesn’t require heating (i.e, the back or side of your sofa).

As the days and weeks become colder, rearrange your furniture away from radiators so when the heating comes on you feel the full effect.

Get yourself some draft excluders

Whichever way you choose to look at it, draft-proofing is a sure-fire way to save money on energy costs and keep you warm for less.

Gaps under doorways and around windows not only allow uninvited arachnid guests to come a calling, but also provide an escape route for all that warm air you’ve conjured up whilst the heating’s been on.

For doors you can readily purchase some draft excluder strips from your local DIY store or make your own with a pillowcase stuffed with old tights, socks or even the filling of an old teddy bear (if you’re creatively inclined).

For the windows, get some cheap self-adhesive foam strips to stop the drafts. Plus, don’t forget drafts from the keyhole and letterbox, which can easily be rectified by the application of gaffa tape.