A guide to the different types of home cover 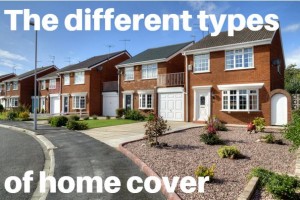 It makes no difference whether you own your home or rent it when it comes down to the typical possessions found within those four walls, as the individual requires the very same peace of mind cover from day one.

Bricks and mortar are not impenetrable, and while some possessions we’ve accumulated over the years are often priceless and irreplaceable (we of course refer to fiscally-nominal jewellery, photographs and assorted keepsakes), there are many more which are of significant monetary value and come at a very real price (TVs and a host of contemporary gadgets).

In today’s world there’s arguably more worth found beneath the roofs of our homes than ever before, courtesy of society’s perpetually obsession with state of the art gadgetry. From flat/wide-screen, HD-ready, 3D TVs and a compendium of tablets and smart phones through to a smorgasbord of gaming consoles, wearable tech and music systems.

The modern homestead is like an Aladdin’s Cave consisting of a mountain of expensive trinkets, the everyday household’s shrine to mass consumerism and planned obsolescence. And that’s before we add the more conventional and time-honoured everyday objects we sit on, lie on, ride, and cook with into the equation.

So you want to categorically know that these material trappings of life in 2015 are as protected as they can be. Or at least replaceable at no extra cost in the soul-destroying event of any of the above being lost, damaged or stolen.

Only there is a price of course, and that’s where home insurance comes into play.

Money more often than not buys us peace of mind and as a nation we’re habitually prepared to find it once a month or year to preserve what we have for the most part. Thanks to being able to insure our prized possessions – of cultural, sentimental or fiscal value – means we don’t have to think twice about purchasing this, that or the other when we’re indulging in one of Britain’s favourite pastimes, retail therapy.

Like our Magpie-like fixation with shiny, digitally-controlled stuff, there’s an abundance of choice when it comes to home insurance policies, arranged by an almost infinite amount of home and contents cover providers out there.

Our bite-size guide to the different type of home cover will afford you an insight into what’s currently available in terms of the bigger home insurance picture, rather than the nuances between one provider and another, just for the record.

First things first though,  you’ll need to ascertain the level of home cover you’ll require. This historically depends on a number of factors, not least how much those all-important possessions are worth, whether you own or rent the place in which you reside, the size of the property in question, where it’s geographically located, the age of the building and the type/extent of security you have.

But before you need to address any of of that, let’s just clarify what exactly ‘home insurance’ is when it’s, well, at home.

Home insurance is the colloquial, one-size-fits-all terminology which in reality comprises the two main elements. Namely buildings insurance and contents insurance, which typically come together under the one roof (no pun intended).

Although available to arrange as separate entities, nine times out of ten they come together when you’re offered home insurance quotes unless you state otherwise. Although to be honest, having the two together as a (to coin a modern phrase) ‘bundle’ is usually the most cost-effective way of arranging your home cover per se.

In the majority of cases the policies afforded us by the home insurance providers are much of a muchness to a large degree, however you can opt in or out of individual features and clauses at the time of negotiation (add ons). Like for example, away from home cover, accidental damage cover, legal insurance cover, home emergency cover and key and lock cover to name just a few.

But what we wish to make perfectly clear at this stage is the very definition of the two fundamentally separate sum parts which comprise the widely-acknowledged home insurance total.

First up we have Buildings Insurance which, in a nut shell is everything in your home which structurally comes as part and parcel of the property. Traditionally-speaking, the walls, roof, doors, windows and fitted kitchens and bathrooms chiefly.

While focussing on this subject building insurance cover normally covers the policyholder for the effects of fire, flooding, storm damage, subsidence, burst pipes and malicious acts and predominantly exists in its various guises to financially protect your home should it be either partly or completely ravaged and ultimately destroyed and needs re-constructing from the ground-up.

The level of cover you’d require is dependent on the cost of rebuilding the property from scratch, taking into account associated building, architectural and legal costs, as opposed to its current, pre-damage market value. A decent building insurance policy in its own right will incorporate cover for outbuildings, garages, barns and sheds too and is aimed at those who own their own homes, rather than those who rent.

Contents Insurance on the other hand is there to cover everything that isn’t pinned or welded down in your home and those possessions and creature comforts which would definitely move around in the event of an earthquake. So that’s pretty much everything and anything from the aforementioned gadgets and furniture to white goods and carpets and curtains.

Readily available to those who rent their homes as well as homeowners, contents insurance allows the policyholder to insure their possessions against loss, damage and theft, alongside of bearing the brunt of burglary, fire, flooding and storm damage. And quite possibly that earthquake we hinted at above.

Content insurance essentially covers a myriad of what home insurers refer to as transportable possessions, including furniture, musical instruments, clothing, bikes, antiques and all your electrical/digital gadgets, while fixtures and fittings including carpets, cookers and fridge freezers are also protected by this policy. Although contents insurance isn’t compulsory like buildings insurance is if you have a mortgage in place, but bear in mind that recent surveys carried out suggest that the average home’s entire contents amount to in excess of £50,000- so it would be prudent to look into it further.

Get a home insurance quote

Bob has teamed up with Policy Expert to provide you with a great home insurance deal – get home insurance cover and fix your premium until 2016. See here for more details, and get a free, no obligation quote below…