As part of the 2015 Budget, further changes to road tax were announced. These changes are due to come into effect in April 2017 and will concern how much road tax will need to be paid for vehicles purchased after 1 April 2017.

The only vehicles to stay exempt from road tax after 1 April next year will be zero-emission cars – all others will be liable for a varying amount of road tax for the first year, which will be based on the levels of CO2 they emit. After the first year all vehicles will be charged a flat rate of £140 per year for road tax.

The changes mean that an average family car will most likely cost between £100-£160 in tax for the first year, whereas drivers of cars that emit more than 255g/km of CO2 will have to pay £2,000 for the first years tax.

This is all a huge change to the way road tax is paid in the UK, so we decided to take a closer look at the numbers to see what effect it is likely to have.

Here’s the new VED (Vehicle Excise Duty) rates as per the 2015 budget: 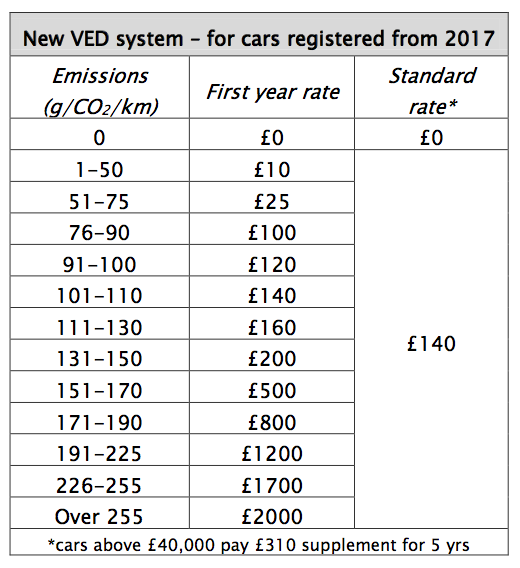 We have crunched the numbers to see what difference it makes if you choose to buy a car before the changes (i.e. on 31 March 2017) or after the changes (on 1 April 2017).

Our hypothetical Buyer A has done all of their homework and decided on a brand new car with a few extras because that’s what makes their new car special, they have decided to save a few thousand pounds on their car and purchased and registered it on the 31st March 2017.

Buyer B has also done all their homework and decided on a brand new car with all the extras, but has decided that they wanted to get the shiny new registration year to go with their shiny new car and went ahead and purchased and registered it on the 1st April 2017.

Which driver will be better off?

As both cars would be the same you would expect the differences to be extremely small…..

Not so I am afraid, if we remove the usual costs like fuel, insurance, running costs etc… and look solely at the car tax or VED:

A little shocked? The difference of a single day over five years’ worth of road tax works out to be quite costly.

The changes included within the 2015 Budget don’t stop there, if you were looking to purchase a higher value car with a purchase price of £40,000 and over they would have to pay an additional £310 a year for the first 5 years after registration, which works out to be a further £1,550.

With the current car tax system the heavier polluting vehicles pay more in VED which will remain the same under the new legislation but the new changes will impact 95% of new car owners which will cascade into the second hand car market costing the general public even more money.

Looking to the further impacts of the car tax increases for the approximate lifespan of a brand new car: