In 2015/16 1.3 million practical driving tests were taken and just 48 percent of those tests resulted in a new driving licence – so with a test costing at least £62, over £42 million was spent on failed attempts last year.

If you have failed a driving test then you know how bitterly disappointing it can be – you might feel like the world is against you and that it definitely wasn’t your fault and everybody else has had it easier than you did.

Well, according to new data from the Driving and Vehicle Standards Agency, if you want to improve your chances of passing your driving test then you might be wise to avoid the West Midlands and head for the Orkneys instead – and also consider your individual test centre too, as there are some huge disparities in pass rates across the country.

The data shows that the West Midlands, Bedfordshire and Greater London have the lowest pass rates, and the Orkneys, Shetland and Powys have the highest pass rates. 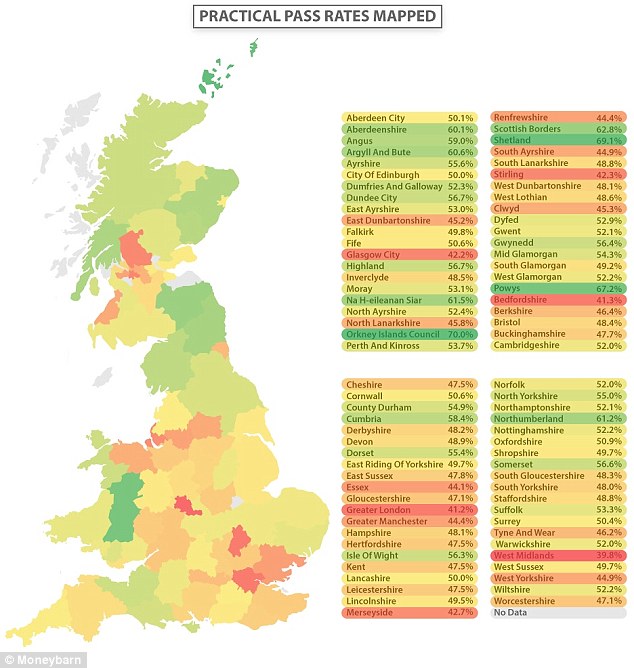 Far below the average, the West Midlands had a pass rate of 39.8 percent, Bedfordshire a rate of 41.3 percent and Greater London a pass rate of 41.2 percent, making those areas the most difficult in general to get hold of your driving licence, but the very worst place of all is the Belvedere test centre in East London with a terrible 28 percent pass rate.

Not too far behind Belvedere are Garston test centre in Liverpool and Wanstead in London were both also low with 30 and 32 percent, and learner drivers in Manchester also face daunting statistics for their test centres.

The hardest and easiest driving test centres in the UK

In general, the data seems to show that more people pass their tests in rural areas than in more built up, urban areas – showing that it is perhaps easier to pass in areas with less congestion. Rural parts of Scotland boast pass rates of 60-70 percent, really high when compared to Glasgow City, with its 42.2 percent pass rate.

Shamus Hodgson, MD of Moneybarn, said: “Whilst, the average national pass rate has increased by four per cent, built up areas are still showing themselves to be particularly difficult for learners, whether it’s because of extra traffic, complex road signage, or added pressure in a busier environment.”

The practical driving test changes later this year and it will be interesting to see what changes that makes to the test experience and how it impacts the figures. The changes being made are:

In other relevant learner driver news, the age-old argument of whether to include motorway driving in lessons or not looks to be coming to a close – the DVSA and Department for Transport are expected to reach a decision soon on whether learners will be allowed to venture on to the motorway as part of driving lessons after a consultation on the proposal ended in mid-February.

Are modern cars making the driving test too easy?

How to pass your driving test – top tips