Jaguar Land Rover follows Volvo in abandoning petrol and diesel-only cars, and will only make electric or hybrid vehicles from 2020. 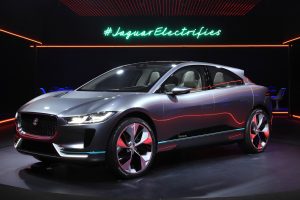 The UK-based carmaker has confirmed that all new models rolling out of its factories from 2020 will either be fully electric or hybrid.

The move comes after the Scottish government revealed plans to phase out petrol and diesel-only cars by 2032, which is eight ears earlier than the targets set by the UK and French governments.

Chief executive of Jaguar Land Rover, Dr Ralf Speth, said: “Every new Jaguar Land Rover model line will be electrified from 2020, giving our customers even more choice,” but also issued a warning that the growing demand for electric vehicles and progression of self-driving vehicles will have consequences – such as jobs being lost and economic depression of oil-producing countries.

“Many could be forced to impose substantial spending cuts within the next five years, straining living standards and so creating unrest in areas already suffering from instability,” Dr Speth added.

Another potential consequence of driverless cars could be protecting privacy, Speth said: “The very technology that could liberate us, autonomous vehicles, could become a method of insecurity and enslavement… Big freedoms could end up creating the big brother state.”

Although Jaguar Land Rover sees electric vehicle production as a way to grow its global workforce, the current emissions of their petrol and diesel vehicles mean that the move to electric is essential if they are to meet new EU carbon targets.

The average CO2 emissions from Jaguar Land Rover cars were well above the UK average in 2015, which is 121.4g per kilometre. JLR’s emissions of 164g per km also puts it a long distance away from the target of 95g it must meet by 2021.

Jaguar Land Rover do not currently make any electric cars, but has made plans to start making it’s concept I-Pace electric SUV next year. With a range of 310 miles per charge, the I-Pace will be in competition with Tesla as well as the new Nissan Leaf.

They have also hinted they are looking into building an electric car plant somewhere in the UK, as Nissan have done in Sunderland where the Leaf is produced. This would be another big boost to the British car industry following BMW’s similar commitment to build its electric Mini in Oxford.

As well as the I-Pace, car industry analysts have noticed that Jaguar Land Rover have also trademarked a number of potential car names, including a driverless concept car called the Future-Type.