A new study that measured the mental activity of black cab drivers in London when driving electric and diesel cars suggests that driving electric cars is less stressful, leading to extra concentration and a happier driving experience. 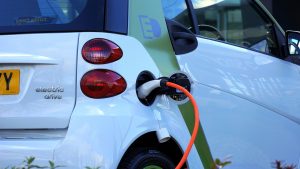 A new study has found that electric cars are less stressful to drive than diesel cars, and could have other significant mental health benefits.

The study monitored the mental activity of taxi drivers in London as they drove a diesel car and then an electric car, and the results suggest that the quieter driving environment offered by electric cars had a more positive effect on the mental well-being of the driver.

The findings of the study contradicts various polls of motorists that have claimed that stress is one of the main reasons that the uptake of electric cars in the UK has been slow. The stress caused by ‘range anxiety’ – worries about how far an electric car will travel on a single charge – is said to be one of the major drawbacks for drivers.

However, this new study suggests those fears could be countered by a less stressful overall driving experience.

The study was carried out by the London EV Company (LEVC), which produces the new plug-in TX electric taxi that will begin to be rolled out on UK roads over the next few years.

They fitted taxi drivers with an electroencephalogram – a ‘brain cap’ – that measures brain activity, and found that the cabbies were more focussed when driving the electric taxi than they were the diesel one. When driving the electric car, the drivers recorded a higher level of ‘beta brain wave activity’ – which indicates higher levels of concentration. The tax drivers were also found to be significantly calmer when behind the wheel of the electric taxi.

The researchers found that the heart rates of the drivers were consistently less variable than when driving the diesel taxi, which suggests greater mental calmness. The additional driver survey data also reinforced these findings, showing that the cab drivers felt an increased level of happiness in the quieter, zero-emissions taxi.

“Given that cabbies spend up to 12 hours a day driving, the vehicle is their office.

“We owe them a duty of care to provide the best working environment – and this study shows that driving our electric cab has a clear benefit for mental well-being.”

Dr Duncan Williams for the University of York (who assisted in the study) added:

“The study suggests that the quieter driving environment allowed cabbies to be in a more concentrated state of mind. In other words, by removing the noisy diesel engine rumble, they are perhaps freed up to get on with driving in a more focused, but calm way.

“It’s a fascinating result and, given the movement towards electric commercial vehicles, shows there are even more benefits of going electric than we might have previously thought.”