Whilst once the merest mention of its presence brought with it the prospect of being watched by an Orwellian Big Brother that much closer, here in 2016 it seems a lot of us are now more than happy to have our driving monitored by an all-seeing eye.

According to a recent survey – which polled the views of some 4,832 UK drivers – almost 6 in 10 of us have admitted that we’d now give serious thought to adopting black box car insurance.

Of course, the ulterior motive behind this new-found embracing of motorist-monitoring tech being reduced car insurance policy premiums.

Yes, it finally seems that having our every driving nuance observed turns out to be something of a small price to pay in exchange for, well, a small (motor insurance) price to pay, as nigh on 60% of British drivers responding to the uSwitch study have at least seriously considered the pros of coming over to the once dark side. 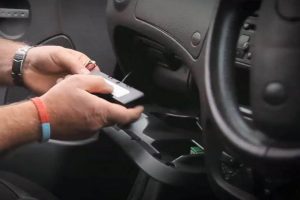 A black box being fitted in a car

The reasons behind this shift in opinion seem to have a great deal to do with increasing insurance premiums, not helped by last November’s Insurance Premium Tax hike which has already shown signs of being passed on from insurers to policyholders as predicted, which saw the IPT rate leap from 6% to 9.5% in the one hit.

According to the results of the survey, the upturn in car insurance premiums – after a significant period of non-change – has triggered a spike in interest amongst a huge amount of drivers, keen to weigh up the advantages offered by telematic-based policies over the more conventional alternatives; with a subsequent 66% rise in sales of black box insurance covers during the past 12 months.

Naturally not everyone is singing from the same insurance-saving hymn sheet on this opinion-dividing subject, and despite a noted ramping up of positive enquiries being made about telematics insurance policies, one-fifth of those answering uSwitch’s survey admitted they’d never even run the rule over black box plans.

46% still hung onto the enduring notion that it was akin to Big Brother watching over them, while 13% cited a phobia of  having their moves monitored by their car insurance provider.

From an insurance angle the enticements are encouraging, with uSwitch suggesting that those drivers aged between 18 – 21-years could benefit to the tune of around £1,347 on average by adopting telematics-based policies.

Insurance expert at uSwitch, Rod Jones, said; “Younger drivers in particular can now prove their worth on the roads, having been penalised by their ‘boy racer’ peers for years,” going on to drive home the message that; “The little black box can make all the difference. As the technology bases premiums on actual driving habits, not generalised data, careful motorists can enjoy a substantial saving.”

To appease those less convinced about the privacy aspect, Jones concluded by saying; “For black boxes to appeal to all, the industry needs to convince motorists of how their personal data is used. Once drivers feel fully assured they aren’t trading their privacy for cost savings, black boxes will be well and truly here to stay.”

>>> Everything you need to know about black box insurance