Say ‘bye bye’ to the paper counterpart driving licence – but what does this mean for you?

Following in the footsteps of the paper tax disc, the DVLA have made the decision to abolish the paper counterpart that makes up your driver’s licence. The change is due to happen from the 8th June 2015. As of this date, the DVLA will no longer issue the paper document that currently makes up one half of your driving licence.

The reason behind this you ask? Well, the DVLA have stated that it falls in line with their strategic plan as well as following the governments Red Tape Challenge consultation on road transportation, hoping to save an estimated £8 million. Just like the paper tax disc, it is the DVLA’s drive to digitalise records and make services easier and current. 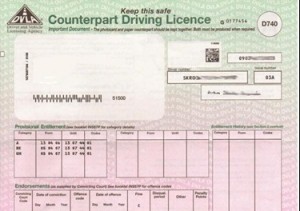 What does the paper part of my licence currently do?

The counterpart licence (the paper bit) goes along side the photo card part of your licence. It is used to record any penalty points you may receive as well as the information of your licence in full. It is also often required to be presented if you get requested to do so by the law as well as if you wanted to hire a vehicle, or, for example, if your employment involves travelling with your work.

What should I do with my paper licence after 8th June 2015?

After the 8th June 2015, the DVLA are advising drivers that you can destroy your paper counterpart, but retain your photo card licence. Your photo card licence will still be valid and if it is misplaced then it should be replaced immediately. Photo card licences are renewed every 10 years, unless changes are made within that time frame. The photo card licence was introduced in 1998, and for those who remain to only obtain a paper licence, these must not be destroyed and retained as proof of your licence.

How will my penalty point and endorsements now be recorded?

Your endorsements and penalty points will still be recorded and stored electronically, where you can check them online, by post or by phone. Police authorities will have access to your data at the roadside via the Police National Computer System. With the changes to the paper counterpart, it does not mean that any current endorsements and penalty points you have will be removed. They will stay on your licence until they are spent.

What do I do if I want to hire a car or my employer needs to see my licence?

The DVLA are developing a new system that will be launched after the 8th June 2015 (although no set date has been confirmed) that will allow business and other organisations (such as insurance companies, employers and car hire companies) to view your information. It will be information that is currently visible on the current paper licence and will not breach your privacy laws. The licence holder will need to give full permission for such action to be done.

In general, these changes do not come as a surprise, with authorities and the DVLA keeping up tp date with the current times. Electronic record systems will hopefully cut down on spending as well as being more user-friendly for the individual.

All information about the licence change can be found on the DVLA website https://www.gov.uk/government/news/driving-licence-changes