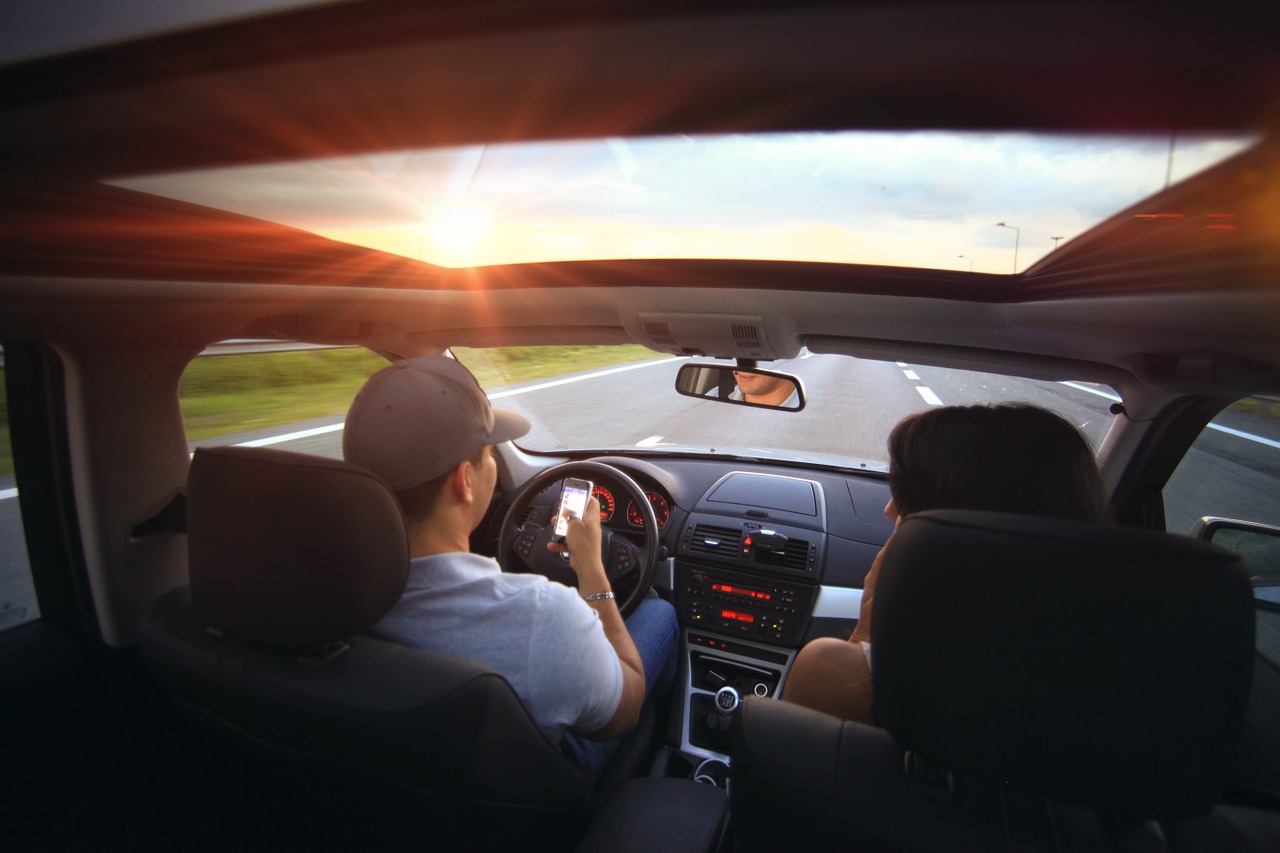 If you haven’t yet heard about telematics  insurance then it’s about time you wised-up to something which is taking the motor insurance industry by storm; not to mention saving thousands of motorists a small fortune on their policies each year. Aha! We knew that bit would grab your attention.

Despite sounding like a space-age method of transporting yourself between time zones (and by that we don’t mean courtesy of an airliner, but more Star Trek/Dr Who teleportation devices), telematics is far more grounded in reality than you might otherwise think; so there’s no need to be beamed down by Scotty or anyone else for that matter. OK, it’s a bit Orwellian in principle – the principle being your motor insurance provider have access to monitor your every (driving) move, via in-built surveillance tech – yet it’s worth the Big Brother element to ensure that A) the policyholder becomes a more conscientious and safer driver and B) their premiums topple as a direct result of their new-found approach and attitude to being behind the wheel.

To afford the uninitiated a quick summary of precisely what telematics is (in relation to motor insurance) and just how the tech is adapted and applied in an (almost) real time environment, there now follows a brief synopsis…

Essentially it’s wireless technology which transmits precise data on vehicle location and driving behaviour/patterns, which ultimately allows insurers to de-average pricing models, capture a greater share of the low-risk driver market, minimise the costings involved in managing claims and improve the policyholder experience/journey. All of which should serve as welcome news to all parties concerned.

Rewinding back to the top and tail of telematics for a nano-second though, and we just want to reiterate how it’s got an in-built capacity to measure exactly when, where and how a vehicle is being driven (even going as far as being able to determine the g-force impact experienced in a collision).

So rather than depending on traditional policyholder profiling/values which ascertain an individual’s age, address, and past driving record so as to deliver a premium quote, a motorist’s behaviour at the wheel becomes a hugely significant factor.

But to give you a more balanced view of telematics insurance (before we’re accused of leaning more one way than another when we appreciate it’s our job to sit squarely on that fence), we’ve seized this opportunity to present to you the cold, hard facts of the matter, outlining the predominant pros and cons; care of our ‘Telematics Insurance – The Advantages V Disadvantages’ consumer guide.

Pay-as-you-drive insurance heralds a new dawn for a greater sense of parity between motorists if nothing else, as finally the accepted (yet largely unjust and seemingly outdated) demographics-based profiling system is revised to take into account actual driver ability and safety behind the wheel.

For too long certain sectors have been punished for belonging to a ‘stereotypical’ group (habitually younger, male drivers), whilst simultaneously older (and often more dangerous) drivers can simply hitch a free ride as they hide behind a convenient demographic.

So effectively black box insurance paves the way for all-round safer and more mindful motorists, which in turn creates a generally safer driving environment for everyone. In theory.

Following on from above, it makes sense that the safer the driver and subsequent roads, the less accidents, injuries and potential fatalities there’ll be as a direct result of increasing numbers of UK drivers being demonstrably more conscientious. It’s no secret that of the estimated 5 people who die every day on British roads, most of these could be avoided if motorists employed more due care and attention while at the wheel; which they’d be more compelled to do if their moves were being monitored by their motor insurance providers.

Plus, there’s nothing quite like the financial carrot of cheaper insurance premiums being dangled to incentivise drivers and instil this more measured approach when on the roads. It’s fervently believed by experts that the constant surveillance will steadily improve driver abilities, which will have an accumulative impact on reducing road accidents.

The inherent GPS aspect adopted by telematics insurance means that as a by-product vehicle theft could be minimised, as the threat of being tracked by the black box assemblage might just prove too much of a risk to would-be car thieves.

What’s more, some telematics systems allow the driver to remotely disengage the ignition so as to render the vehicle immobile. Of course, if the lure for thieves is still too great, then the in-built GPS will at least be able to locate the stolen car. On balance though it’s genuinely believed that less opportunity to steal cars (those which embrace black boxes) will point to reduced claims; thus reducing premiums in the long run.

Similar to the compendium of data stored in an aircraft’s black box, the telematics system deployed in vehicles will host a vast amount of information and stats, which when analysed in the aftermath of an accident will prove extremely useful in working through and resolving claims.

For instance it would be possible to establish driver speed and/or implied dangerous driving prior to an accident, with irrefutable statistical evidence providing a first-hand account of what actually went on. This consequently speeds up the claim process and affords greater levels of accuracy which naturally benefits all parties.

Not necessarily what we want to hear as would-be policyholders, yet it’s also got extra value for us too when you think about it. Because motor insurers will be able to set premiums which more accurately reflect the probability that they will be claimed, thus means they are positioned to charge driver’s deemed to be a higher risk, heftier premiums than those who can provide black box-derived – and circumstantial – evidence that they pose a much lesser risk.

This means they can realistically attract more of the latter as potential policyholders and inevitably increase market share/revenues. The good bit for us being the more competitively priced car insurance premiums, if we can keep our end of the deal up.

In the event of being involved in a road accident, black box-equipped telematics-insured drivers will be able to call on their all seeing automotive eyes and ears to defend them should you face claim culpability/prosecution from a third party.

Essentially telematics assemblage can assist in proving a policyholder’s case should they be wrongly implemented/accused in an RTA, as the tech will have monitored the actions and behaviour of the insured party right up to the point of impact; therein ascertaining whether or not the policyholder was in any way to blame for the ensuing incident.

Dangerous drivers may fall below the telematics radar

There’s a clear financial incentive in the appealing shape of reduced car insurance premiums for good drivers to opt in to taking out a telematics-based policy, however – and conversely – the opposite applies to dangerous drivers as there’s every chance that they currently fall into a low premium demographic; derived from the principle that their age/driving experience/car type/postcode/etc is seen as more universally favourable in the eyes of motor insurance providers who have hitherto stuck with the tried and tested formula of policyholder profiling.

In which case they won’t be forming an orderly queue any time soon to compromise the blissful ignorance enjoyed by their insurer. It’s all very well attracting good drivers with promises of lower premiums thanks to telematic insurance-prompting, but by the same token premiums need to be ramped up for bad drivers. If they only lower their premiums, then it will generally become more expensive for insurance providers utilising black box systems.

Continuing on the theme of the issue raised above – and instrumentally whereby bad drivers avoid using telematics insurance policies and therefore not ending up accurately penalized for their motoring misdemeanours – and this could impact an insurance providers decision to fund the installation of devices as part of their dedicated black box policies; as ultimately the costings could exceed the potential savings and increased revenue generated from the tech if not enough motorists are signing-up.

The very fact that black box insurance policies are relatively new kids on the policy block could throw up all sorts of situations in this teething period. For example what if a telematics insurance-opting policyholder decided they were still paying too much with their existing provider and decided to jump ship and switch to a car insurance competitor. One which refused to recognise and accept the ‘data transfer’ as the way in which it was procured differed from its methods.

With a lack of standardised and template regulations in place with regards to telematics insurance in this motor insurance arena as yet, there are far more grey areas than monochrome as it currently stands. This of course would have serious repercussions in terms of accruing no claims bonuses/discounts, which heavily rely on accumulative data passed on from one insurer to another. Aware of these concerns, the Association of British Insurers (ABI) is said to be looking at ways to ratify and enforce some form of common data standard and uniformity going forward.

The question of ID protection rears its ugly head once more when telematics tech is talked about in an insurance domain, as the perceived compromising of personal privacy is of paramount importance to would-be policyholders, worried that the concept of shared data could pass into the wrong hands if not governed properly from the outset.

Other companies, the police, government agencies and a host of marketeers are amongst the chief bugbears for many car insurers who might otherwise contemplate arranging telematics insurance policies, justifiably worried that any amount of their individual data disclosed could, possibly, be distributed far and wide without their prior knowledge or agreement.

Possible restrictions on vehicle use

Another aspect of telematics insurance is the proliferation of pay-as-you-drive features which ostensibly limit the policyholder to pre-agreed mileage restrictions and/or times of day in which they’re allowed to be on the road; so as to be in-keeping with the qualifying criteria set-out in their telematics insurance documentation. Some readily impose night-time or early hours curfews, with fines sustained by those drivers who break them, while elsewhere the number of miles travelled during certain hours (rush hour periods as a point in question, as statistics allude to a higher percentage of accidents historically occurring between the hours of 11pm and 5am), or indeed, types of road used, come into play. Reduced premiums aside, these stipulations could have the opposite effect on premiums if and when the policyholder contravenes them, intentionally or accidently.

It’s not beyond the bounds of possibility that some telematics insurers might charge fees for the removal of a black box system from a policyholder’s vehicle, should they choose to change their car at any time; which is again something worth bearing in mind and could be weighed up against the savings made over the premium’s lifecycle. Furthermore, some insurers have been known to charge for the installation of the black box device from the outset.

Because, fundamentally, a black box figuratively describes what a vehicle is doing, rather than what the driver is doing, if the latter needs to take aversive action to negate a possible impact scenario and they subsequently brake softly to appease the black box, the consequence of these actions could be devastating. Critics refer to an instance in 2013 whereby during the inquest into the death of a young driver was adjudged to have sped home in a tragically failed attempt to return there before an insurance-imposed curfew came into effect.