What does the Insurance Premium Tax (IPT) rise mean for you? 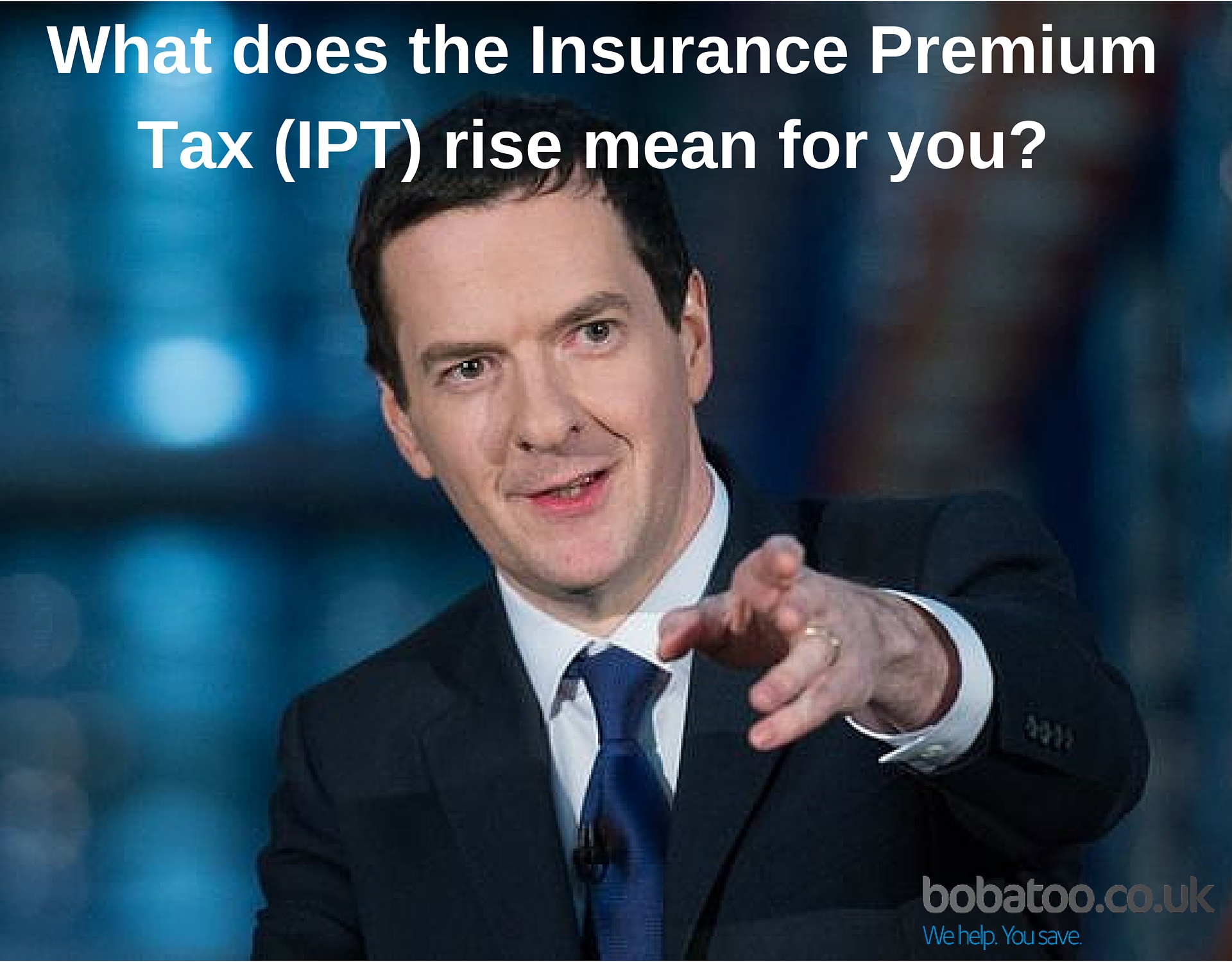 In his summer Budget, the Chancellor of the Exchequer George Osbourne announced a rise in Insurance Premium Tax (IPT).

The rise, which is due to come into effect on 1 November, is expected to have far-reaching consequences for insurance companies and consumers. Some experts have even claimed that the rise will end up backfiring on the UK government.

But before we get into all that, we thought we’d answer some of your questions regarding IPT and what the rise might mean for you.

What is Insurance Premium Tax (IPT)?

IPT is a tax on general insurance premiums and is added to all premium quotes you are given. VAT is not applicable on insurance products, so instead the UK government require us all to pay IPT on them instead.

Is IPT added to all insurance premiums?

Only on ‘general’ insurance premiums – which basically means all the common ones. There are some exceptions, such as:

But for the most part, all of the insurance quotes you receive will be inclusive of IPT.

How much is IPT increasing by?

Who will be affected by the rise?

The Government’s own research has stated that “all households and businesses that purchase insurance” will be affected – so that’s pretty much everyone!

How will this affect me?

The cost of travel insurance will also increase, and private health insurance will also be affected – with costs expected to increase by 7%-15% per year. This will be particularly noticeable for employees who have private medical insurance in respect of taxable benefits as IPT is included in their overall P11D liability.

In terms of car insurance, the rise in IPT will put further financial pressure on policyholders who are already suffering from high premium costs.

A recent study by Confused.com (http://www.insuranceage.co.uk/insurance-age/news/2429768/car-insurance-premiums-show-biggest-jump-in-5-years) showed that car insurance premiums rose by 8.1% in the third quarter of 2015 (compared with 2014) due to increased claims costs.

A further rise in costs due to the increase of Insurance Premium Tax could lead to many motorists being priced out of insurance – leading to underinsured vehicles or higher policy excess charges being adopted.

Likewise, with less people being able to afford health insurance there could be increased pressure put upon the NHS.

What do the experts say about the IPT rise?

When the tax hike was announced, it caused an uproar in the insurance industry. Neil Nimmo, the CEO of Lockton, said the rise in IPT would likely hit UK businesses, saying:

Whilst a headline rate of 9.5% doesn’t sound significant, it is in fact an increase of more than 50% of the standard rate. As ever with rate rises, the most prominent concern is that it will drive a number of consumers to forego buying insurance, which increases their personal risks, and in the case of motor insurance could mean a rise in illegal drivers.

UK insurers will now need to pay particular attention to policies and premium payments that extend beyond the deadline, if they don’t want to be caught out.

We are extremely disappointed in this rise in Insurance Premium Tax and will mean insurance will become more expensive for the public as a result. Those hit by this stealth tax will include the 20.1 million households with contents insurance; 19.6 million with motor insurance and 17 million with buildings insurance.

The Government has been working with the industry to reduce the cost of insurance for consumers – including a summit chaired by the Prime Minister. It therefore seems counterintuitive to be taking measures which will add to the cost – effectively taxing protection.

We hope the Government will review this rise and correct it in further budgets.

What can I do about the rise in IPT?

As the price of insurance is expected to increase across the board, it is now more important than ever to make sure you get as good a deal as possible.

Here at Bobatoo.co.uk we work with a host of leading insurers to make sure get a great deal on insurance that is suited to your own individual needs.

To learn more, visit our dedicated insurance pages below and get a free, no obligation quote today: