A full review of The Trade Centre Group 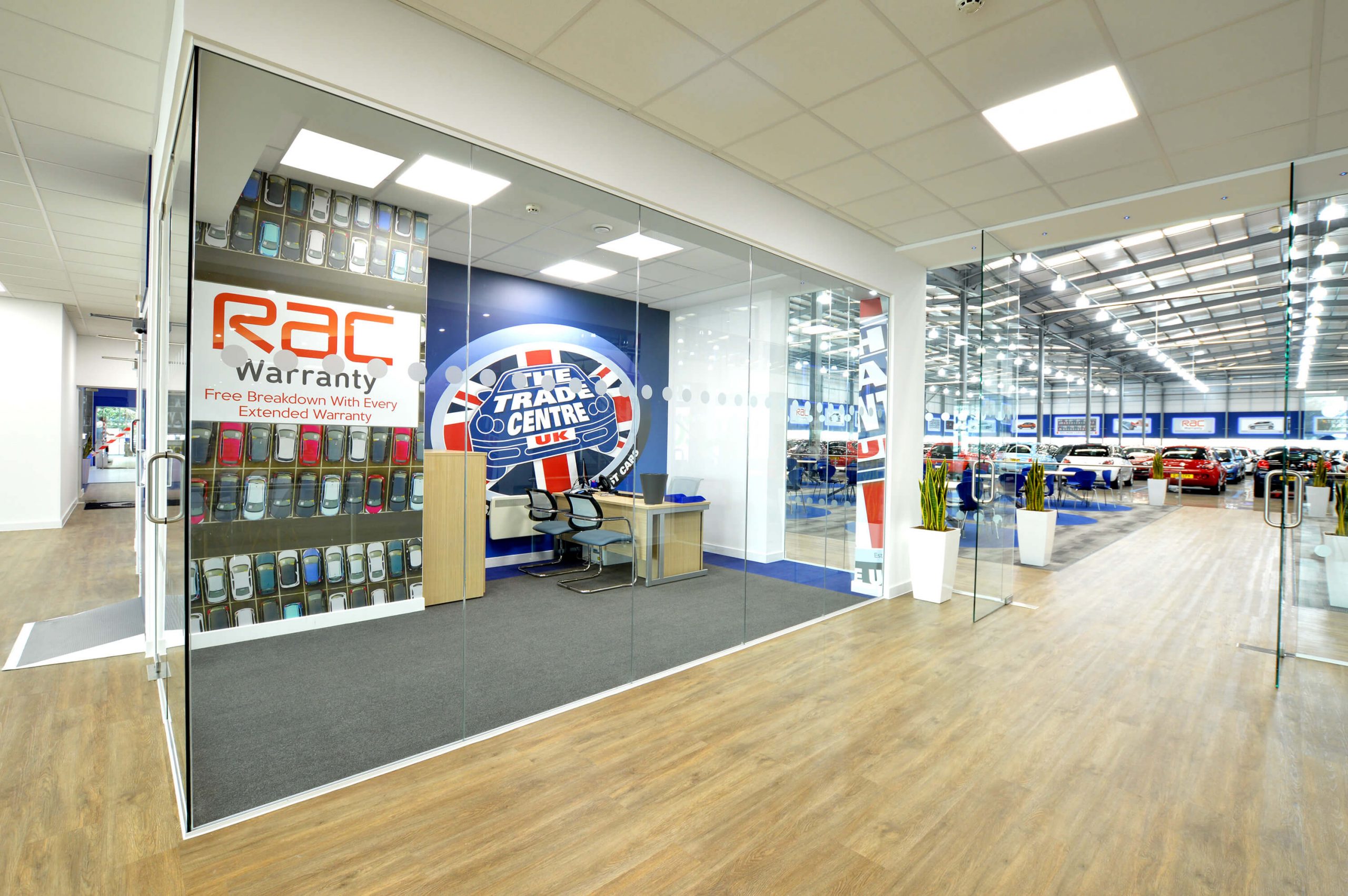 The Trade Centre Wales: Where it all began

Why choose The Trade Centre?

Buying a brand new car can be really expensive, and usually, its value is guaranteed to plummet in a matter of months thanks to depreciation, which is why many people prefer to buy a second-hand vehicle.

More and more UK drivers are dipping into the used car market, where you can get cars that are just a few months old for a fraction of the cost of buying it completely brand-new. But where can you buy a used car?

One of the most popular British used car dealers is The Trade Centre Group, who started off as The Trade Centre Wales with just 3 outlets. The company offers thousands of amazing used car deals, with many starting at just £20 per week with a deposit as low as £99! They have a wide range of used cars to choose from, as well as many finance deals and part-exchange offers.

A family-run business with quality service at its core, The Trade Centre Group is the biggest used car supermarket in Wales, trading under the name The Trade Centre Wales in the South region, including:

As one of the fastest-growing used car dealers in the UK, they have expanded into England over the years, where they have used-car centres in:

They operate under the name The Trade Centre UK for all outlets in England.

Selling more than 35,000 used cars every single year, The Trade Centre Group is renowned for selling the most competitively priced second-hand cars in England and Wales.

Each and every car sold by The Trade Centre Wales or UK undergoes a rigorous 99-point vehicle safety inspection as well as a full valet at the point of purchase, and a helpful pre-handover check to ensure that the car you’re getting is of the highest quality.

The cars at The Trade Centre UK are suitable for both high and low budgets, and their stock list consists of everything from family saloons and hatchbacks to sporty convertibles and 4x4s, with some vehicles available on finance deals for as little as £20 a week, plus deposits as low as £99.

The Trade Centre Group does not sell commercial vehicles like vans or pickups, but they do sell all makes and models of second-hand cars and SUVs.

The Trade Centre Wales: Where it all began

The Trade Centre Wales was first established in 1999 in Neath, which is currently their head office.

It is 100% owned by the Bailey family, with Mark Baily as the Founder and Chairman, and Andy Coulthurst as the CEO.

Mr. Bailey then expanded his business by investing into a centre in Merthyr Tydfil (2011), Abercynon (2016), Wednesbury (2017), Coventry (2018) and Rochdale (2019), and has more than 700 employees to date, showing just how much the company has grown successfully through customer satisfaction.

As part of its commitment to ensure high-quality customer service, The Trade Centre Wales offer a massive selection of used cars to choose from, selling them at the lowest price possible to all valued customers.

They actually go one step further than finding you the cheapest deal. If you manage to find exactly the same car somewhere else in the local area that’s cheaper, The Trade Centre Wales will give you £1,000 for your troubles as well as the difference in price! This Price Promise guarantee shows how much confidence they have in providing you with the cheapest price possible, compared to other local used car dealers.

If you have a vehicle that you need to get off your hands, The Trade Centre Group are more than happy to help you out.

With a promise to pay you £500 more for your motor than any other dealer, you can leave your old car on the forecourt and drive away with a new (used) one in just 60 minutes, all while knowing that you’re getting a great deal.

While maintaining high-quality customer service and keeping on top of their 40,000+ sales every year, The Trade Centre Group are very busy supporting others behind the scenes too.

Throughout their years in the used car dealer industry, they have:

Why choose The Trade Centre to buy a second-hand car?

In addition to offering Wales and England the cheapest prices on a huge array of used cars, there are many reasons why you should choose The Trade Centre UK over other second-hand car dealers.

After customers have bought their new used car, The Trade Centre has a highly-dedicated customer care team on hand for any queries that they may have. There’s also an unmissable friendly and approachable and feel to the company as a whole, which is reflected in their many positive reviews on Trustpilot. They even have a humorous side, which you may remember from their “Tell 'Em Trevor Sent Ewe” advert:

Car finance with The Trade Centre

The Trade Centre UK offer amazing finance deals and approve more than 1,000 people on a weekly basis for car finance.

Depending on your credit history, it can be difficult getting finance for a new or used car, but The Trade Centre has an in-house broker so they’re able to quickly find you the best deals themselves.

If you want to apply for finance with The Trade Centre Group, you simply have to complete a short form on their website, which takes around 60 seconds to tell you whether or not you have been approved for finance.

The Trade Centre has a direct connection with Equifax, which enables them to give a much more accurate eligibility decision instantly.

Once you’ve been approved, you may be able to drive away in your new used car in as little as one hour!

Trade Centre UK has an ‘Excellent’ rating on Trustpilot, with happy customer reviews saying that they found the company ‘Easy to deal with and very helpful’. Customers were also very impressed with the amount of stock on offer and the friendly, knowledgeable staff on hand to help walk them through the process. 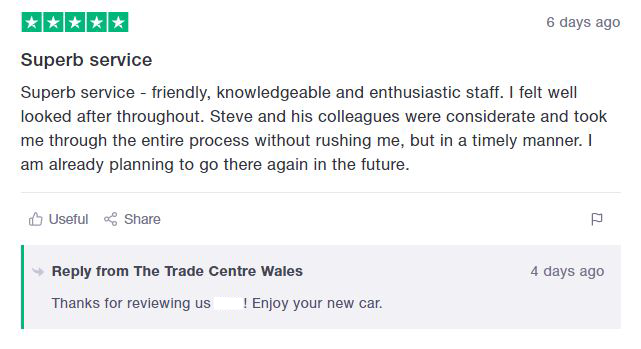 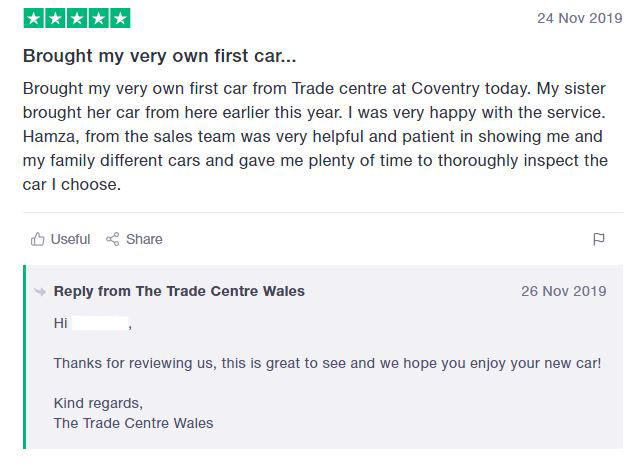 The Trade Centre UK was also ranked 90th in the Sunday Times Top Track 250, which ranks the top 250 private companies (mid-market) by their turnover from the previous year.

For any queries or information you require about purchasing a second-hand car with The Trade Centre UK, you can find all contact details for each of their outlets in Wales and England on their website.

All outlets are open until 9pm on weekdays and 6pm on weekends.

If they have a showroom near you, you can visit them at any time to speak to a representative from their team – you do not need to make an appointment.